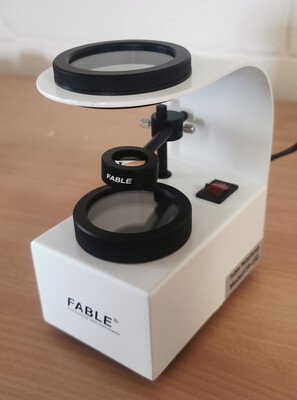 The polariscope is consisting of two round polarizing filters, one directly above the other, both of them have their own vibration planes (the vibration place of the polarizer is at right angle to the vibration direction of the analyzer, the field between them remains dark and this position is known as “Crossed position”) and with a good light shining up from the bottom. It’s primarily used in separating genuine from synthetic amethyst. Now, most gemologists use it to quickly determine if the stone at hand is single or double refractive to determine the optic character of the stone. It also useful for distinguishing solid inclusions from negative inclusion as well as for spotting polysynthetic twinning.

Operation:
Cleaning and placing the gemstone onto the sample platform, powering on then keep moving the down filter, you will get 4 types of phenomenon in 360 degree rotation:
1. Single refractive: The gemstone appears dark throughout a 360 degree rotation.
e.g.: Glass imitation, tektite, opal, fluorite, andradite, and so on.

2. Double refractive: The gemstone blinks 4 times light and dark throughout a 360 degree rotation.
e.g.: crystal, cordierite, topaz, tourmaline, Olivine, apatite, and corundum gem and its synthetic, zircon and so on.

3.   Double refractive Aggregate: The gemstone appears light all the time.
e.g.: nephrite, Jade, dyeing marble, devitrified and so on.

4. Anomalously Double Refractive: The gemstone will show you anomalous double refraction
e.g.: some of Glass imitation, opal, fluorite and andradite, and so on.